I arrived at Cannes this year breathless with anticipation for the festival; after all the films I had made (all the mud I had stood in behind the camera) I was amazed it had taken me so long to visit this hallowed place. I didn’t know I was unusual, or part of an almost non-existant group:  Women who make films.

Cannes is truly its own world and totally different from Paris.  The people, are very shiny and new in Cannes.  They are buffed, puffed, shined and polished to look their best as they strut around on the streets late into the night. There are fancy cars with stars and films galore.  Sharks and minnows eat up one another in the fishbowl of the Festival.  Cannes is the “mother” of all film festivals and while the flashbulbs pop its easy to forget that its really a beautiful small beach town. Years ago,  a few camera’s snapped a photo of Bridget Bardot and a world class Festival, was born.  But, the glamour, gowns, jewelry, parties and personalities hide one glaring fact:  This past year there were no women filmmakers, that were honored or that participated in the Festival.  This is a shocking display of male domination in the film industry and in a modern world where women continue to gain ground in other areas in business. The film industry continues to marginalize the power seats and women, are simply not invited.   As one of the top film festivals in the world, this is not good news 12 years into the new century.  In the US, (*according to Women in Film statistics) a full 22 percent of films shown at TRIBECCA and SUNDANCE are directed by women.  This means that if you are a women filmmaker in Europe, your chances of being recognized are less than zero. That is why US festivals are so important and continue to be for women who make films.

Sadly, the world of film in Europe is still dominated by men proving there is 50% of the population in the world that is underserved.  Despite the actresses who arrive and dress up the red carpet,  the women who work in film are completely sidelined.  There is a silence and it’s deafening.

Here’s an image I took at Cannes. See if you can figure out what it is…and let me know.  If you can’t guess, here’s a hint: 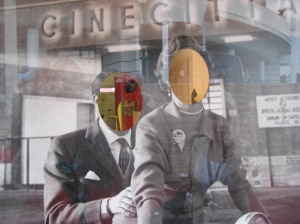