Just the other day, as we were reviewing our lingerie selection, it occured to us that we were in the wrong city.  Los Angeles, though boasting the glamour of Hollywood, just doesn’t have the selection of lingerie I would like.  Let’s face it, “Vive la France” has many meanings, one of which is quite frankly, all about the lace.  So, Let’s review:   Marie Antoinette, Madame Du Barry, Madame de Pompadour…all great ladies of lace, and some, not even the marrying kind.

Clearly, the French have this all over the Americans, we’re just a bit late, and if Victoria’s Secret is all we have to show for this situation, we’re in dire straights indeed.  “Agent Provacateur” just opened on Rodeo Drive, so thank goodness…that’ something, but the truth is, I could go on and on about fashion here in LA and it would simply never be Paris. But, I digress. Love, lingerie, they happen all over the world, but we’ll be chatting about those things in Paris….mostly with some brief visits to Hollywood, where they say…”Hollywood Romance” is basically an oxymoron (read: Moronic) so no, that’s not the subject here.

It’s the lingerie, my dears, that’s what we’re up to here, and we think that in Paris, and, perhaps in some other places, we’re on to something for both men to enjoy, and women to procure.  As “Styliste Privee” consultant, we’re on to the most enjoyable subject in the world….we think you’ll agree! 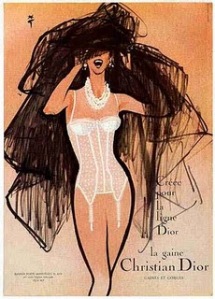